Today's blog entry is brought to you by the letter 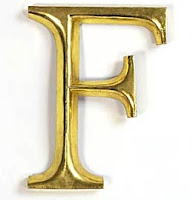 It's been a pretty slow day. We did some shopping and not much else. Liz over at Eternal Lizdom gave me a challenge to name 10 things I like that start with the letter F. Of course she gave some other bloggers easier letters. I'll just keep thinking that the others needed the easier letters and that she understood my potential to exceed. Oh, OK, she likes the others better. Fine! 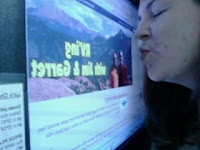 This is a picture off of Liz's website. Her letter was R. She used our blog (RVing) as one of her R's. I was touched. Yes, one could say, I'm a little touched. The image is backwards, I know. I'm guessing she used a mirror?

1- Facebook: I've been enjoying Facebook a lot lately. I like using it to keep track of friends. I love all the status updates that friends post. Sometimes a status is as simple as indicating what they're eating to what they want to do. I like it. I constantly refresh my Facebook page looking for new things to comment on. I guess I just have a need to constantly throw my 2 cents in.

2- Freedom: I'm not talking about American freedom. I'm talking, open road freedom. The freedom to travel the country is amazing. The freedom to wake up when we want. The freedom to pretty much do as we please. That's the freedom I'm liking. It's like the freedom of being an adult but many degrees better. It's that step above, not having to eat your veggies because your an adult. 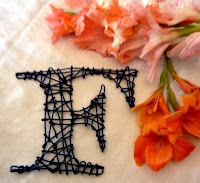 3- Flowers: What's not to like about flowers other than allergies? No, I'm not allergic. I enjoy flowers except when they appear on my fabrics or clothing. I guess I don't like bees that sometimes appear on flowers. Oh sure, I understand the need for bees but I don't have to like it. I like photographing wild flowers that we've seen on our travels. Of course being winter, we haven't seen much. 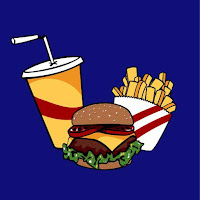 4- Fastfood: Unfortunately I do have a love for fast food. I like Taco Bell, McDonalds, Burger King, the list is endless. Maybe it's all the salt and sugars they add. Maybe there's a secret drug that's added to make us addicted? I'm not sure. I could have entitled this section just plain ole food. I love food. Doesn't everyone like food? Do you know many people who doesn't like food? Maybe these people prefer an IV over chewable food?

5- Fembots: I liked the Bionic Woman and Six Million Dollar Man. When they brought several Fembot episodes to the shows, I was loving them. They were a challenge to the Bionic duo. You can click on the Fembot link above to read more about them. Isn't she pretty? 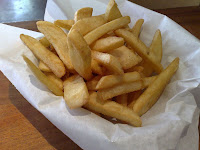 6- Fries: Tater tots, shoe strings, crinkle cut, waffle cut there's so many. My favorite are steak fries. Yum! You'd think a potato is a potato but the cut seems to make a difference. Doesn't it? It is the cut right? 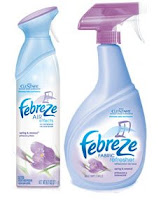 7- Febreze: I like Febreze, but it just doesn't like my RV leak detection system. I love scented things. Fabric softeners, candles, sprays and the like. Yeah, a scent freak of sorts. I suppose I could have entitled this section fragrances. Oddly, I rarely wear cologne. 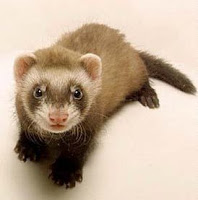 8- Ferrets: These are such cute animals; I know, I had one. At some point I had 2. Yeah they smell, yeah they can be messy but they are cute. Watch one run sometime and you'll laugh. I had joint custody with an ex. We had Taz and later got Tiffany. Carl took Taz, I took Tiffany. Taz died and I eventually sold Tiffany. I was too lazy to keep up with her.

9- Festivities: Not just festival festivities but parties. Dinner parties, gatherings, costume parties, theme parties, whatever it may be, I usually want to be a part of it. 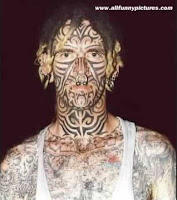 10- Freaks: You have to have freaks in the world to highlight the "normal" people. How many times have you been somewhere and pointed out someone a little odd to another person. Chances are, the person who caught your eye was a freak. C'mon, sometimes it's as simple as someone talking to themselves to someone with a fully tattooed body. These are the people that privately entertain us, they humor us. We all have levels in which we classify them, but nonetheless, they are "different" they are freaks.

I looked back at John & Derek's blog for inspiration on being in this area. I tried to read as much as I could. Most of it was scanning through entries and seeing this area through their eyes. For those of you who need a reminder, John & Derek recently left the RV park we're now at.

We were a little bummed today because there was no SuperWal-Mart. We went to a regular one, but it wasn't open. I think it's new? As a side note, you'll begin to notice Wal-Mart has dropped it's hyphen and has added an asterik to the end. This is the new logo.

Anyway, we stopped at FoodMaxx which was STILL higher priced than Walmart. John and Derek had mentioned this place in their blog and about how the carts were nasty. Don't worry, we were careful. You were worried, right? Although we didn't go there, we also saw the 99 cent store where "some ass clown" stole their GPS.

Well, I'm out of things to say. I know, hard to believe. See ya!

Hi, please leave a comment. All comments unless explicit will be posted!

Look Who Stopped By: